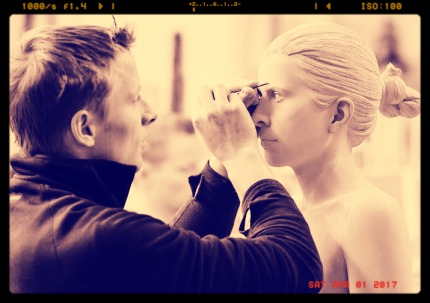 Matthias Verginer's works are full of humor. The sculptures of Matthias Verginer celebrate an imagination which at first glance seems ambiguous and funny, but the laugh they provoke does not appeal to sentiment, rather, in the words of Henri Bergson, "It appeals to intelligence pure and simple". The artworks of Matthias Verginer do not just entertain and charm us, they also invite us to reflect on the mechanisms with which we perceive reality, its questionable or absolute truth and its changing or immovable aspects. 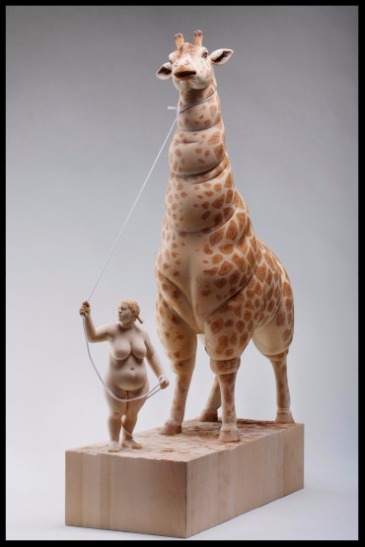 My Favorite Pet by Matthias Verginer

The ironic sculptures by Matthias Verginer are made up of highly colored assemblage of animals and human figures, sculpted from wood. The line of thought Matthias Verginer brings to us is filled with doubts and questions, articulated through these human and animal figures, the symbols of objects and their colors. While it is easy for us to recognize these things because they keep their true forms and colors, it is difficult for us to recognize the meaning and the message of the entirety of these tricky and incongruous combinations. Manipulating the legend of Europa, Matthias Verginer changes the bull into an improbable hippopotamus and the delicate form of the goddess into fat and swollen limbs, her sensual reserve transformed into a pose which is quite improper for a goddess. There is a similar kind of subversion in Icarus's girlfriend, this girlfriend is shown in Verginer's style with striking thighs and eye-catching breasts, and she is wearing small, silver wings. She doesn't look like she would be the sort of person who would fly too close to the sun, either for lack of wit or lack of ability.

Matthias Verginer titles his compositions "Hot Whale Surfing", "Tomato Tan", "Damn Hat", The Rabbit and the Turtle", "Lifting Four Watermelons" and so on. The humorous and brilliant aspect is in the titles also, which are never banal or straight-forward. The titles of the artworks by Matthias Verginer always inspire new and witty speculations. In the ironic artworks of Matthias Verginer, we can clearly perceive the expressive use of bright orange, sugary pink and brilliant blue. We can also clearly feel the abundant and precise forms of the bodies, their disproportionateness measured against the harmony of movement and gesture. Both of these are well considered aspects which are part of, and vectors for, the irony and playfulness in this series of artworks by Matthias Verginer. 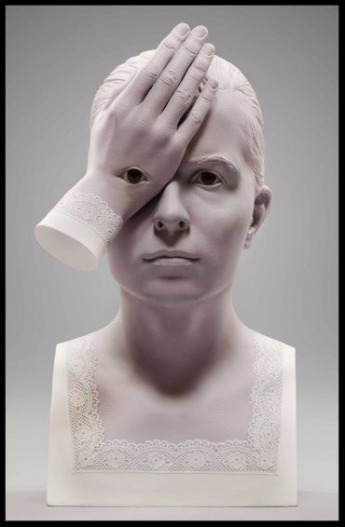 The Sixth Sense by Matthias Verginer

The busts sculptures of Matthias Verginer are realistic in their similarity to reality and absurd in their ties to meaning, and yet they are as beautiful as the chance meeting on a dissecting table of a sewing machine and an umbrella. The new busts series by Matthias Verginer is as bewildering and mysterious as dreams, they hold within themselves both surrealism and magic realism, sophisticated quotatations, literary references and bizarre intuitions.