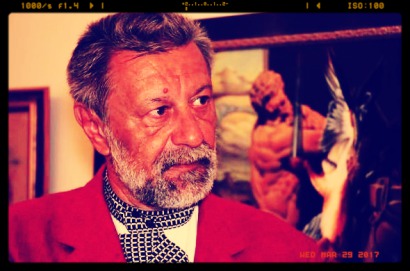 At a quick glance, if your memory is still burdened by some lingering ideological remnants, you might be tempted to say Nicolae Maniu is a realist, a part of our everyday life, even a little bit of a humanist, just like any major artist. Once you have watched his faces a bit longer, the reality vanishes and slips through your fingers due to some inner excesses. Then, of course, you might think of surrealism, of the destruction of the whole by the hypertrophic detail; however, soon the syntax of the image escapes the hyperrealist immobility, the self-sufficiency of the image, and flows unnoticeably – at least for a less playful viewer – into the voluble abyss of the surrealism. But Nicolae Maniu is restless and unpredictable, so he doesn’t stay here enough to let the virtual viewer go home enjoying peace of mind. Nicolae Maniu moves briskly to other chapters in the history of painting where one can find the classical Poussin, the romantic Delacroix, the mannerist Veronese or Pontormo, Rubens, the infernal Bosch or all the fantastic story tellers, with their inexhaustible language, dark soul and a mind clearly set in the uncertain delta in which the dream turns maybe into nightmare, and vice versa. 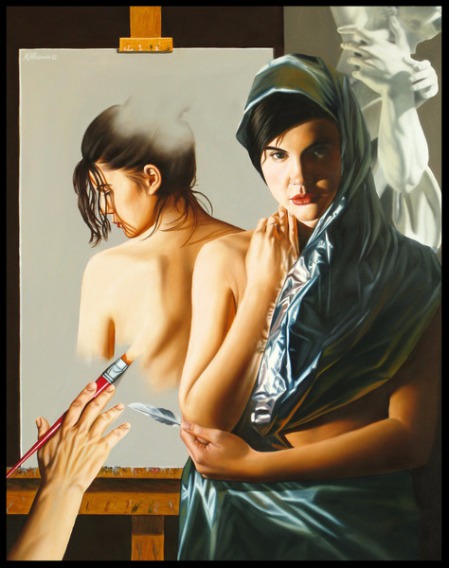 The frames of Nicolae Maniu's canvasses enclose a world in search for its own balance, a world which is hidden in metaphors, permanently  unveiling itself, thus giving the viewer the chance to decipher its misteries: it is the real world that he wants to preserve at any cost, behind his silver layer, a constant symbol of his works. Just like his great masters, Van Eyck, Dürer, Rubens, Rembrandt, Vermeer, and Dali, Nicolae Maniu has the outstanding talent to render forms thus opposing the comprehensive figurative to the abstraction and absurd that culminated in non-art.

Playing around with Georges de la Tour and Caravaggio, who direct the light/shadow in the same way and who have a similar temperament, Nicolae Maniu competes with the true value. And he has won. Ever since the beginning of his career, the paintings of Nicolae Maniu have been selected by the Parisian art galleries. The numerous topics inspired by the Greek mythology, the attempt to find  relationships between the classical painting and the moderns artistic expression have placed Nicolae Maniu among the most important artists of the European contemporary painting. 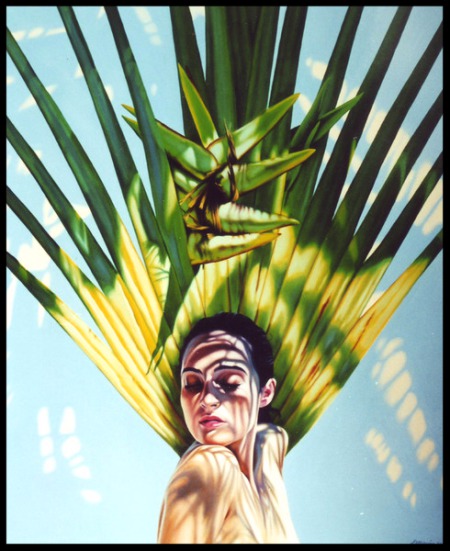 Retrospectively, the artistic evolution of Nicolae Maniu spans the history of painting from the classics to the 20th century art, thus placing him next to important names in Europe’s Cultural capital. Just like Brancusi – who, in early 20th century became part of the “Western adventure”, yet remained himself – Nicolae Maniu had the intelligence to apparently adjust, going ‘against the flow’ – as he entitled some of his works from the 1990s, which reveal a character determined to challenge the fashionable trends. It is the obssesion to preserve his authenticity that has brought him success. To put it into other words, due to his extraordinary devotion, Nicolae Maniu has managed to hold an important place in the history of contemporray art. Undoubtedly, that is also due to his attachment to Renaissance accuracy, which offered him the perspective of orginal composition exercises. The works of Nicolae Maniu ponder on the supremacy of the visual and illusion, without abandoning the rules of the composition. 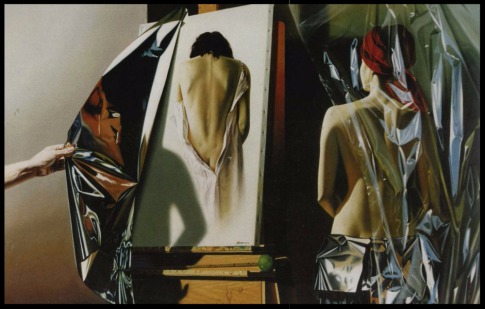 Nicolae Maniu is a painter who masters all techniques. He is able to convey his message in the minutest details. Despite his space movement, his message is clearly and concisely formulated within the structure of his compositions. The silky glow of his colours, the shining play of reflexes, shadows and contrasts of light as well as the body representations turn his works into an emotional mise en scene which give the impression of a life that can leave the canvas.

Nicolae Maniu belongs to a small group of painters that employ the trompe-l’œil, which requires outstanding technical qualities. This oil on canvas technique, mingled with a a realistic style, his precise way of working, his own organization of colours which capture and reflect light, as well as his sense of composition that targets the essence give clarity, harmony and a calm balance to the works of Nicolae Maniu, despite their often dramatic message.

Nicolae Maniu evolves at least on two directions of a perfect realism that intermingle thus resulting a complex subject. This fusion leads to a multiplication of the reality meanings. It is more than realism, it is “metarealism”. 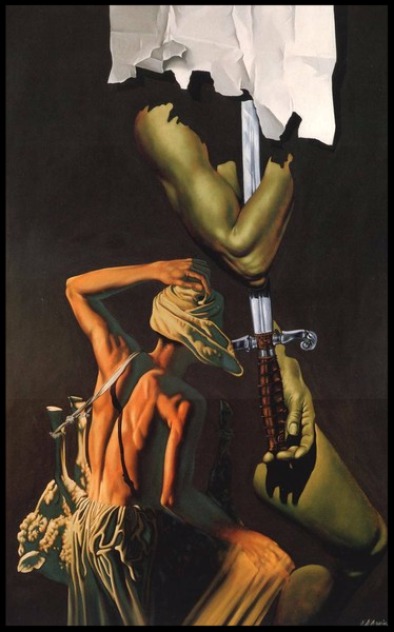 To introduce Nicolae Maniu, we must mention first the magic of History which makes of this Carpathian born man a Latin with such a clearly mediterranean sensitivity that he defines himself as being both Italian, or more precisely Dacian and Roman, and above all French, in a more and more irremediable manner, as he likes saving.

The professional progress of Nicolae Maniu is entirely dedicated to artistic creation. First a sculptor until 1971, he gave up this art he masters so well for painting which, has been his “raison d’être” ever since. In 1983, he left his native country and settled in Cologne, West Germany. The welcome which, since his first Personal exhibition in 1978, the public and critics have given him could only go on growing. 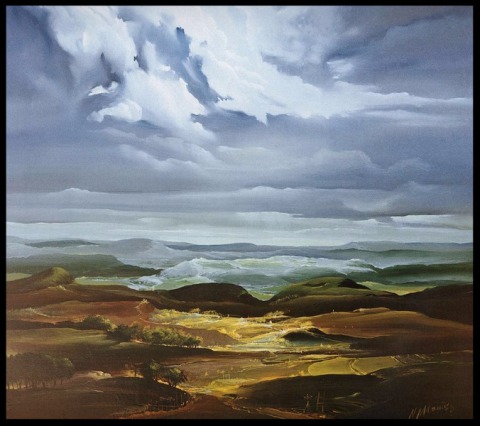 The correspondence between the real and the fantastic is to be found in the paintings of Nicolae Maniu created in Romania: landscapes that recall the seasons and people’s work, with a deep love for his country. The contact with the Western world made the topics of Nicolae Maniu paintings more complex and the expressive force exploring the mystery of life and death more intense. In the early works of Nicolae Maniu, the artist’s serenity and quiet force are boldly exhibited, yet refusing violence. Nicolae Maniu poses questions about the meaning of our existence, he invites us to reflect, but his sobre and impressive paintings do not display an existential anxiety. The generous and intense pictorial vision of Nicolae Maniu, the almost magic accuracy of his technique, the purity and light of his colours make him one of the most original personalities of the contemporary art.

Nicolae Maniu is an excellent draughtsman who knows in detail the technique of the old Renaissance masters, the 'trompe-l’œil' and all the effects of modelling which give the impression of volume on a bidimensional surface. The drawings of Nicolae Maniu display admirable force, boldness, and great talent. To these qualities he adds the glow and clarity of colours like ochre, grey, or blue having the transparency of watercolors. His need for perfection is matched by a humanistic vision stemming from a vast culture, which harmoniously combine the real and the imaginary. Is it surrealism or fantastic realism with profound meditative vibrations? The compositions of Nicolae Maniu follow the classical rules of balance and simmetry, yet the ensemble has the surrealist feeling of a dream come true.